Leaving Sihanoukville wasn't just the part of the plan but the right thing to do after two weeks of real holiday. Time to move on. Cambodia so far is a real highlight of SE Asia.
I felt kind a lonely since Maria is now with her new boyfriend Jon, a British guy she met on Koh Rong island where we were on "full moon party". Also, Steve is going to meet up with a girl he met, where else, on Koh Rong island. I was so like, man, am I going to hang out with couples there or what? The worst thing was that there were no music for the next 5 days because Cambodian king died.
We were all together in a midnight bus to Siem Reap. Maria and Jon in front of the bus, Steve and I on the back. It was a super clean sleeper bus with Wi Fi all the way to Phnom Penh. Ticket coast - 12 dollars.
We arrived in the early morning, it was not dawned yet. Dusty, old bus station of Siem Reap. Near the bus,  big gate. Tuk tuk drivers were behind the gate screaming and waiting for the "main in charge" to open the gate so they can jump on all of us like hyenas on dry bones. Steve already arranged tuk tuk and hotel for all of us.
Room was really nice, maybe one of the best we stayed in Cambodia, for 12 dollars (2 single beds).
Siem Reap temple villa had average food, nice swimming pool and very bad internet connection (we did not have good connection in the room, at the reception was perfect). Anyway, we'll stay here 2 days only, just to see the Angkor temples and we are off to Lao. 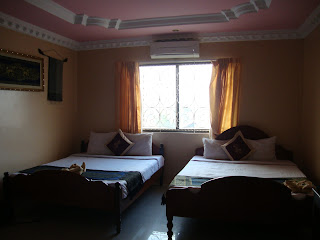 When I woke up, Steve was gone. We shared the room. I don't think he is coming back anyway 'cause he was so excited to see that girl. I was happy for him anyway.
Same day, I called my friend Dana. She is living with her husband Stanko in Siem Reap as he is director of some company for cleaning the land of mines. Plus her friend from Belgrade Tatjana is in Siem Reap at the moment so, lets do something today. She asked me if I would like to join them, they are going to visit Kompong Pluk floating village. They picked me up after 30 minutes and we left. We gonna meet up with Maria and Jon there, at the ticket counter. Maria and Jon went to the doctor one hour ago. Jon had some ear pain. After about 30 km we arrived at the port but we couldn't find Maria and Jon. I called Jon and we realized that they are at the other port. They couldn't manage to come quick so we left. We arranged good ticket price of 10 dollars for the boat (each).
It was a long tail boat, nice and I could say safe. The ride started and we could see how local people live on the river, the way they are fishing, houses they built to live, local kids.. It is a poor life with very hard conditions but even with that, they were all smiling and waving to us. I was really wondering how people live there when it's a rainy season. 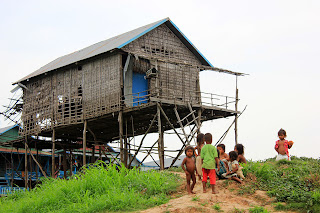 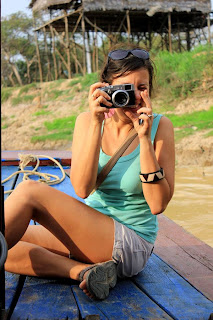 The other one with camera - Dana 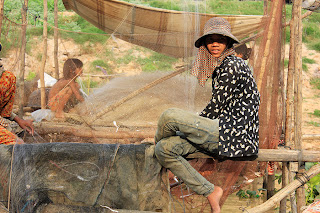 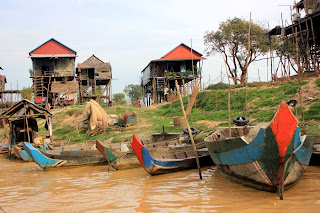 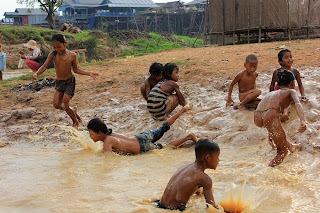 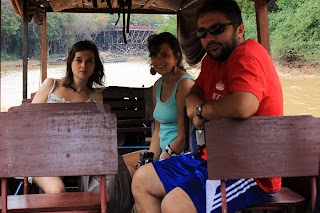 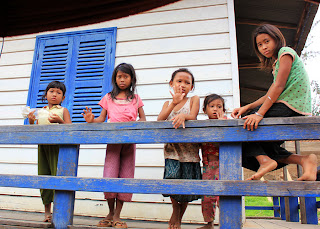 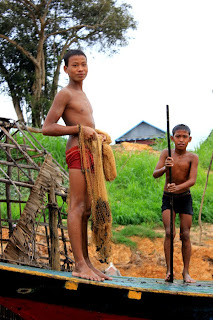 After 40 minutes of ride we stopped at some small, lets called "port" for a break. From there you can rent canoe and visit the lagoon. We decided not to go. During the dry season lagoon looked really bad so just we went for a drink. I took coconut. There were not many tourists which I liked it and this floating village is much better than the one near Bangkok. Here you can really see true beauty and on the other side not feel like someone wants to rip you off for some stupid souvenirs. 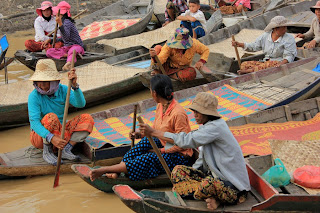 waiting for the work 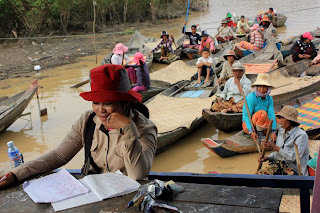 We took the same way back.
I returned to hotel around 6:30pm. We agreed to meet at night in Pub street (where all bars and clubs are) but we all know, no music and parties.. Anyway, Simon is in Siem Reap so we will see him again hehe.. 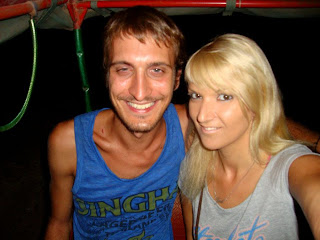 Simon and I in tuk tuk 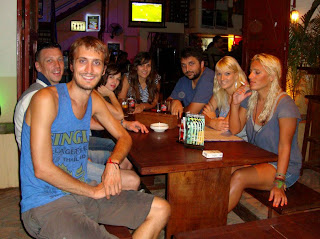 Friends
Posted by Unknown at 10:00